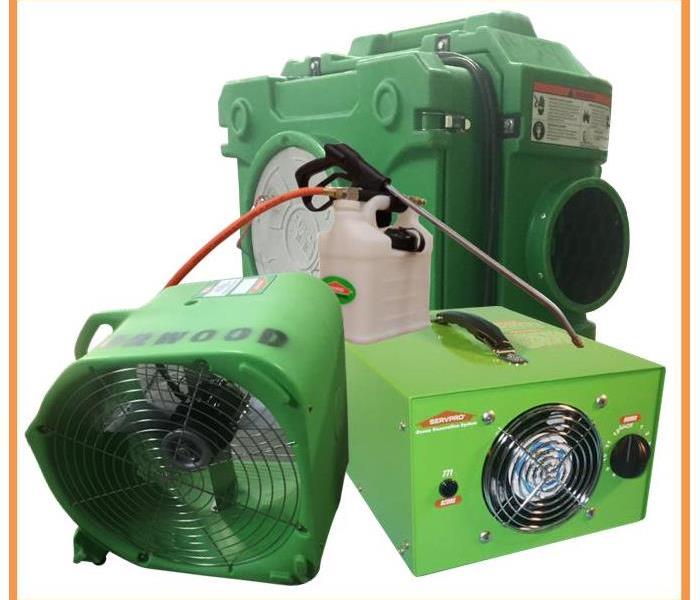 Highlighted below are the various equipment at our technician’s disposal along with a brief description of how and why our technicians would use them.

Hand pump-up sprayers or powered sprayers can dispense chemicals at about 50 psi (pounds per square inch) of pressure. They are used to spray applications directly onto surfaces being deodorized. The most common applications for direct spraying in smoke deodorization are on heavily charred structural components or on fabrics and carpets. Since direct spraying wets the surface being treated, only use this method in situations where discoloration is unlikely or of no consequence.

Ventilation box fans generate airflow of great velocity, from 3,000 to 5,000 cubic feet of air per minute (cfm). Moving large volumes of air is useful for ventilating odors, fumes, and vapors from a structure.  Box fans perform various deodorizing functions. When odors are heavy in a structure, a restorer may use the box fans to flush as much of the odors from the building as possible. After this initial ventilation, the restorer will use other methods to deal with remaining odors. Box fans are commonly used to ventilate a structure after thermal fogging. The air in a structure which has been thermal fogged for deodorization should be exchanged to ensure all vapors and residues of the deodorizing product are removed. Air is exchanged by ventilating indoor air to the outside and drawing outside air into the structure. The box fans help exchange outdoor air for indoor air.

Fogging is a common deodorization process. A deodorizing product is dispensed as extremely small particles in a mist. The fogging process produces particles small enough to penetrate surfaces where odor particles are giving off odor. There are two distinctly different fogging procedures – Dry and Wet Fogging.

Thermal foggers vaporize solvent-based or petroleum-based deodorizers, generating a “smoke” or fog consisting of very small particles. The droplets generated by the thermal fogger range in size from as small as one-half micron to larger particles up to 25 microns, approximating the size of odor molecules. The droplets make a smoke, physically similar to the smoke produced in a fire, enabling the deodorizer to interact more effectively with odor-causing residues. Thermal fogging products are a blend of strong fragrances, odor counteractants, and solvents. They counteract odor-causing residues and eliminate odors rather than just masking them.

ULV stands for Ultra Low Volume. The ULV fogger atomizes liquid deodorizing agents, primarily water-based agents, producing a fine mist. These foggers generate deodorant particles of approximately 10 to 60 microns in size, small enough to penetrate into most areas where odor-causing residues accumulate. The ULV fogger dispenses water-based deodorizing products and so is referred to as “wet” fogging and would be used to neutralize “wet” malodors like pet urine.

Sometimes odor molecules are eliminated by combining them with oxygen molecules. Oxidizing is the process of a substance combining with oxygen. There are two distinctly different oxidizing machines at our technicians’ disposal – An Ozone generator and a Photocatalytic oxidizer.

The ozone machine generates ozone, or unstable oxygen molecules (containing three oxygen atoms). Ozone is also known as activated oxygen because it chemically reacts with odor-causing molecules to oxidize residues (become combined chemically with the extra oxygen molecules) and remove the odors. The portable ozone machine eliminates a variety of odors caused by animals, cigarette smoke, mold and mildew, or fire and water damages. Ozone can be toxic to. All people, pets, and live plants should vacate the environment during ozoning. {NOTE: I will share ozone safety procedures in my next blog, “Safety during Deodorization Procedures”}

An air scrubber can remove airborne particles, as well as odors and gases, from the air. The device draws dirty indoor air into the machine, then pulls the air through a series of filters, capturing particles, gases, and odors on the filters, and then exhausts clean air back into the environment. The machine holds different types of filters:

Neutralizing agents are injected into a material using a syringe and a needle or a pump and needle. The injection technique is used when the affected area is small or the surface area is delicate. Also, when the surface material cannot be removed for proper application of neutralizing agents the injection technique may be utilized. An example of when the injection method might be considered is when the procedure of detaching carpet from the tack strip and rolling the carpet back is not practical.

In many deodorizing situations our technicians use multiple procedures to produce the desired results. Combining multiple techniques can produce effective deodorization, but you do not always need to use multiple techniques.  As previously mentioned the universal first step of any odor situation is to remove the source causing the odor. The second basic step is to clean the area of residues. After completing these first steps, our technician may find that the malodor has been properly neutralized and that no additional steps need to be performed. Regardless of the severity of the situation, our clients may rest assured that all necessary steps, and only those steps that are necessary, will be taken to ensure proper malodor neutralization.

Next I touch on important odor remediation safety equipment and procedures.